Tanzanite is a beautiful one location gemstone, part of a group of mineral called Zoisite. It is found in Tanzania close to Mount Kilimanjaro in an area, which is approximately 4km long. It has beautiful blue and violet to purple tones and very occasionally it can be found in the pink and green tones. It is treated with heat like many gemstones to enhance its clarity but I think it is also very nice in its natural form.

Tanzanite is a very recent discovery. There are several stories relating to its first discovery but mostly you will find 1967 as a discovery date. At this time, a Tanzanite is still more affordable than a Diamond but the prices have gone up in the last year in particular due to an array of difficulties surrounding its mining. Just keep in mind that it is very unlikely that Tanzanite will be found anywhere else and it is just as likely that all the mines will be depleted within the next 20-25 years.
This wonderful gemstone is believed to promote the regeneration of cells, skin and hair. It is also supposed to protect against the side-effects of medical or surgical interventions.
Spiritually, Tanzanite is a calming stone.

Turquoise
Everybody knows Turquoise; if not as a gemstone, it is known as a colour.

Unlike Tanzanite, Turquoise was well known by ancient civilisations. It is said that for the Aztecs, it was more popular than gold. Over the years it has been used both for its beauty and its many beneficial properties. Generally speaking, Turquoise works to restore balance and good health, no matter your ailment.

Turquoise is treated to enhance both its colour and durability. The lower the quality, the more porous and soft the stone is. There are various treatments consisting in waxing, oiling, epoxy binding etc… You may see Turquoise sold as ‘’ Reconstituted Turquoise’’. It is normally used with smaller fragments of Turquoise, which are crushed into a power and reconstituted (bonded) with resin. Make sure you buy from a reliable source though as it is not unusual to find reconstituted Turquoise made of anything but the gemstone itself.
Use only soapy water to care for this stone and always store on its own

I thought we would briefly talk about Zircon, which is also one of the official December birthstones in the US. It is not to be confused with Zirconia which is a lab-created synthetic material.

Zircon is over 4 billion years old so it really has nothing in common with a Zirconia! This gemstone is a typical example of how the market prices do not always reflect the real value and availability of a gemstone. By this I mean that Zircon is rarer than Diamond, yet it is much more affordable. Some gemologists reckon that if Zircon was marketed the same way than Diamonds were, not only it would be way more expensive but also all Zircon mines would be depleted within 12 months. The Zircon is hard and dense, which may explain why it survived so many eras. They come in various colours but brown, blue and white are the most used. The colourless version is often used as a cheaper but natural substitute to diamonds due to its brilliant luster.

The general meaning of Zircon , both physical and spiritual, is Balance.


This month I thought it would be best to talk about Topaz and Citrine at the same time because they are often confused. It seems that before Gemology became an official science in the early 20th Century, most brown, orange and yellow stones were called Topaz. With gemology, the distinction between Topaz and Citrine was made. Citrine is actually a variety of quartz. Topaz represents a variety of its own amongst gemstones and is much harder and heavier than citrine. It is also more expensive but unfortunately it can be difficult to distinguish to the naked eye. Therefore it is quite important to be careful when buying yellow topaz in particular as sometimes citrine is sold as Brazilian Topaz or Gold Topaz. Whilst Citrine is lovely, I am sure you would prefer to know exactly what you are buying and pay a fair price.

The most valuable coloured Topaz are red and pink as they are extremely scarce. Next in line but significally lower in price are Orange and yellow topaz, known as Imperial Topaz. However not everybody seems to agree on which colours should be called Imperial so you may find contradicting information.

Next in line is Blue Topaz , whose various shades are known as London Blue, Sky Blue and Swiss Blue. These usually results from different treatments by heat and radiation of the most commonly found colourless version of this gemstone. Finally topaz is also found in brown and green, the latter being rare.

Citrine comes from the latin word ‘’Citrus’’ and is also close to the French word ‘’Citron’’, which translates as lemon. Natural Citrine is rare and it is usually the result of heat treatment from smoky quartz and lower quality amethyst (which we will talk about next February!). Is is found in various places all over the world but the main supplier is Brazil.

Citrine is believed to relieve negative feelings such as depression and anger. It is beneficial for digestion and can be helpful with thyroid, heart, kidney and liver disorders. It is also said to help overcoming physical addictions, fears and phobias. Like most gemstones there are various meanings and interpretations of the physical and metaphysical benefits of the Citrine but the general idea is that it repels negative energy.

I read many times that in ancient Greece, Topaz was believed to bring strength to the wearer and bless him/her with invisibility during desperate times. It is said to facilitate communication and self-expression and is therefore beneficial to artists and writers. As for health benefits the list is endless and each colour seem to have its own benefits. Blue is good for the throat, golden is good for mental clarity etc…

Next Month: Tanzanite, Turquoise and Zircon
Posted by Unknown at 02:04 No comments:

Depending on the size, colour, cuts, treatments, location and availability, gemstones vary greatly in price but many of them are a lot more affordable than people think. More importantly, they are fascinating and we thought we could share some basic information and pictures with you, starting with birthstones.

In the UK, October is the month of the Opal. It is also a 14th anniversary gemstone.

I’ve always thought Opals were all white-yellowish stones with this lovely Shimmering rainbow of colours (called opalescence), but as it turns out there are many different types of Opals, too many to describe here, but know that they are not all shimmering and come in a variety of colours and from all over the world.

Often, the thinnest pieces of opals are glued to another stone such as Obsidian to prevent it from breaking. It is called opal doublets or opal triplets if the opal is sandwiched between two other stones.

I learnt at my own expense that opals are very fragile and are prone to crack easily. I discovered after breaking a small bead that one of the main components of opals was water and therefore opals can literally dry out!

If you have the opportunity to acquire an opal, do not be afraid to keep it hydrated with some (cold) water by using a moist cloth, especially if it is part of a jewellery piece as you only want to wet the opal. Note that opals will not do too well if exposed to heat.

I did some research on the meaning of opals in terms of physical and spiritual benefits and the most recurring word is Creativity. It is meant to stimulate the imagination, a true crafter’s stone!
Health wise, Opal is believed to purify the blood and kidneys.

In USA and some other countries, Tourmaline is also accepted as an official October Gemstone.
The name tourmaline comes from the Singhalese word(s) tura mali or turmali, which translate to something like stones with mixed colours. I have seen different spellings of the word and different translations, but you get the gist.

The type of tourmaline that seems the most in demand is the Paraiba tourmaline, a gemstone of an intense blue, which was not discovered until the 80’s in the Brazilian state of Paraiba. Prices vary but these are rare and quite expensive!

Tourmaline is a stone that can increase flexibility, happiness, hope, objectivity, compassion and serenity. It also enhances tolerance and understanding.
Health wise, tourmaline is known to have a detoxifying effect and helps relieving stress.

Next Month: Topaz and Citrine

For a few days at least, the Island welcomed the warm and lighter days of the summer.

Our beautiful Island hosts a variety of events throughout the summer months and the Manx Craft Guild has once again been invited to attend these, to showcase the talents of our members and of their handcrafted gifts. 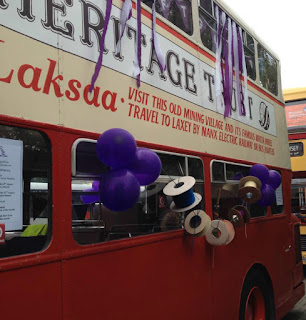 Our first summer event was Douglas Carnival returning for it's second year after a 20 year absence. Although we didn't have stalls this year (after last year's torrential rain and wind), we still took part in true Guild fashion - by decorating a vintage bus and of course.

We were kindly loaned  bus the from the Manx Transport Museum, which we decorated with our vibrant colours of white and purple, with streamers, balloons and some fabulous handmade giant cotton reels, made by our own Linda Quirk.

There was a fantastic atmosphere, with the prom packed with people coming out to cheer the floats and get into the Carnival spirit.  We are looking forward to being part of the Carnival next year. 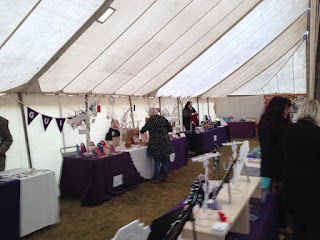 The Southern Agricultural show is held annually over two days in Great Meadow, Castletown and is always a popular day out for the whole family. From livestock displays and competitions, to children's activities, vintage farm machinery to live entertainment and of course, Craft and Produce displays. 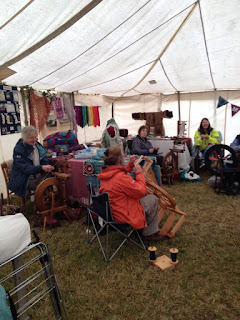 The Manx Craft Guild attended on the Sunday, but sadly that day summer had left us to be replaced by  wind and rain. The tent we were in was still full of cheers as we shared it with the Manx quilters and weavers. 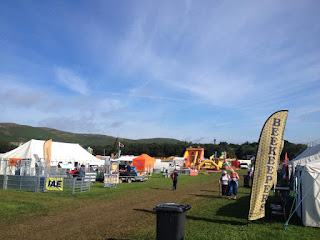 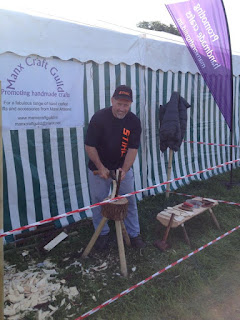 We had a fantastic two days with lots of visitors, and a great turnout from our own Guild members.  With our lovely Kevin Harvey outside the front of our tent demonstrating to visitors how he makes his fabulous wooden spoons and utensils.

Island at War, 22nd-23rd August
Our last event off the summer saw us step back in time to the 1940's with us returning for our second year to Island at War. Our Manx Craft Guild members dressed up as land girls and came in their best tea dresses. The victory rolls were up and the head scarves on. The train whistled into the station with the public to see the tanks and vintage cars and the have a cuppa and a shop in our tent. 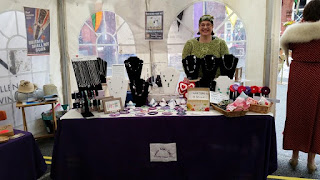 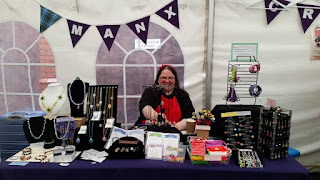 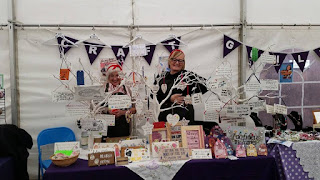 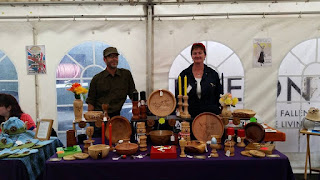 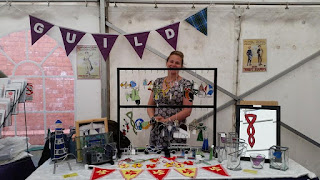 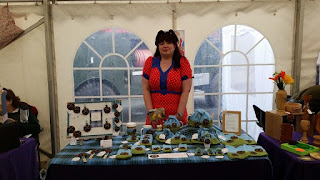 The Guild was founded to encourage crafts across the Isle of Man and is open to all who have an interest in crafts and crafting.The Guild aims to organise regular craft events for Guild members to showcase their goods, along with "have a go" events, to give everyone an opportunity to try a new craft.